First Day of Inspections for WSC 2015

Today was the first day of static inspection. I spent most of the day on Twitter, so I'd encourage you to check that out. WSC has pages up for inspection times and status for the Challenger, Cruiser, and Adventure classes. Note that neither Antakari nor ITU are listed on the scrutineering schedules, so although there have not been any official announcements of their withdrawls, I think there's no question that they're both out of the event.

Eindhoven was the first team to pass all of the inspections, and Nuon passed static inspection as well. It looks like all the other teams will have to re-present later.

Now for some photographs!

Overall, UKZN's car looks fairly well executed. It utilizes leading arms in the front suspension, and trailing arms in the rear. If you look closely at the chassis pictures, you might note those little worm gear rigs on the top surface, located near each wheel. I'm told these are for changing the ride height at each corner, and are able to be actuated by a drill from outside the car. I'm not sure I like the idea of being able to rapidly chance the suspension setup; it seems like a recipe for badly screwing up the stability of the car.

Somehow I didn't take any photos of it, but UKZN tilts the entire car to normalize the array. 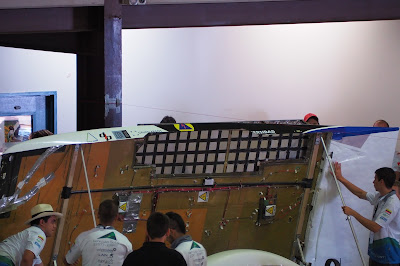 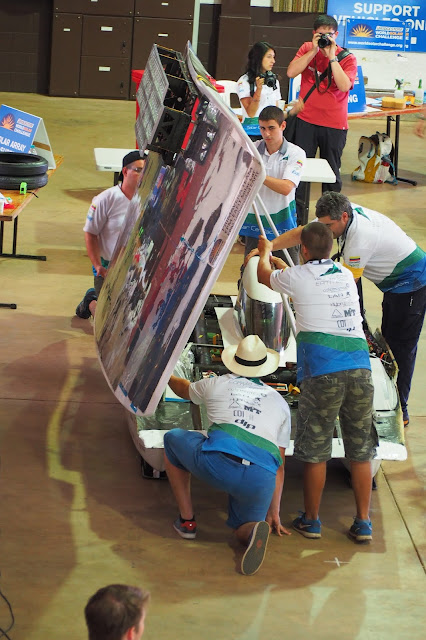 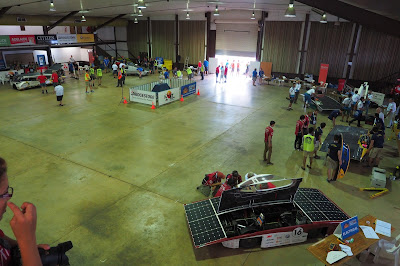 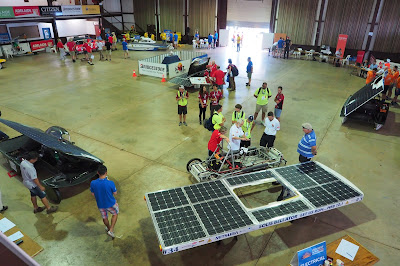 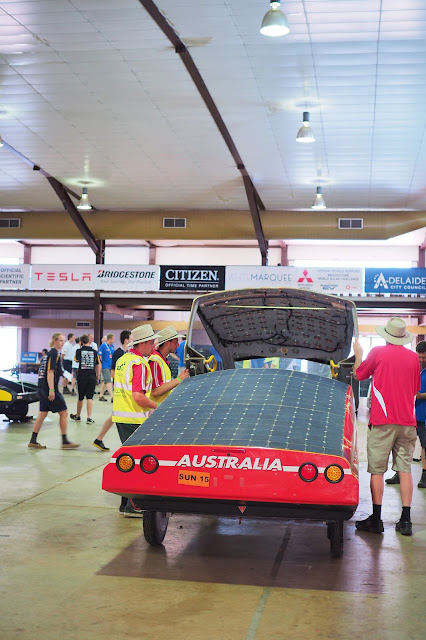 Overall, a pretty solid first day of inspection. On the Challenger front, I definitely expect some shenanigans with array standing as the race progresses. Most teams were limited in how far they could normalize their array by the top of the bounding box, and I don't know what's going to stop them from tilting the array a little further to catch more sun once they're out on the race route. As discussed in a past post, Michigan has carefully designed the car to tilt all the way, but they didn't really show how they were going to point the concentrators - at inspection, they were just leaned against the side of the car.

On the Cruiser side, we saw the big three from 2013 today - Eindhoven, Bochum, and Sunswift. Eindhoven has an extra handicap this year that I forgot about - the array doesn't come off the top of their car; they only can flip up the array on the "trunk". In 2013 they had a set of ramps that they backed the car up onto to angle the entire car towards the sun, but tilting the car in that direction would violate the height of the bounding box this year. I was wondering if they would have something interesting and unexpected, but it doesn't seem like it. Sunswift displayed an auxiliary array panel that they will place over the windshield when charging, but they're kind of in the same boat as Eindhoven - the only normalization they do is flipping up the trunk panel. Kogakuin, on the other hand, will be tilting the whole car - see approximately 0:20 in this video.

Meanwhile, teams are still testing their cars out at Hidden Valley. I didn't make it out there today, but Adelaide is back up and running with their new array, and SunSpec had some sort of problem with their front right wheel. Looks like it was just a flat tire?

One final note, on tires (it seems like my favorite topic, right?). We've heard from a few teams that the Bridgestone tires have very low rolling resistance - but unfortunately, maybe very low reliability to match. Some teams report very high numbers of flats... When I spoke to some of the teams that aren't using the new tires this year, many of them said they were approached by Bridgestone and offered tires - but late enough in the testing cycle that they didn't want to risk switching.

See you all tomorrow! Punch, MIT, Blue Sky, Kogakuin, Minnesota, and many more team will be inspected.
Posted at 2:57:00 AM