Well, that's one more day down. When I left inspection, here was the state of the status board: 1, 2. Some teams were still finishing their first pass through scrutineering, so don't worry about the teams with no stickers. The WSC timing page has been updated, though (You need to select Static Scrutineering in the "view other days" dropdown at right). It looks like Bochum, MegaLux, and KIT have all passed as well.

Note that only two teams made it through every station in the first pass without any red stickers at all: Eindhoven and Lodz. Bravo to both of those teams for being well prepared!

I haven't had a lot of time to peruse team blogs while I've been in Australia (send me tips if you think you have something noteworthy!), but it's worthwhile to mention CUER's continued adventures with motors. It sounds like they finally have everything sorted, and good on them for passing on the karma and helping out WSU in a pinch.

Here's what the final day of inspection looked like: 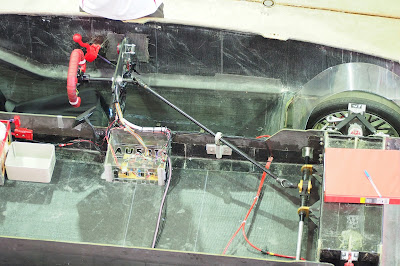 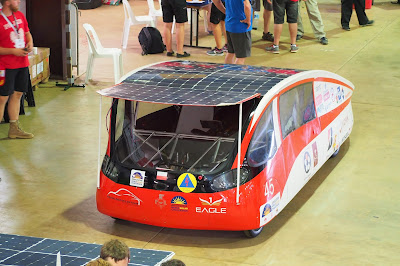 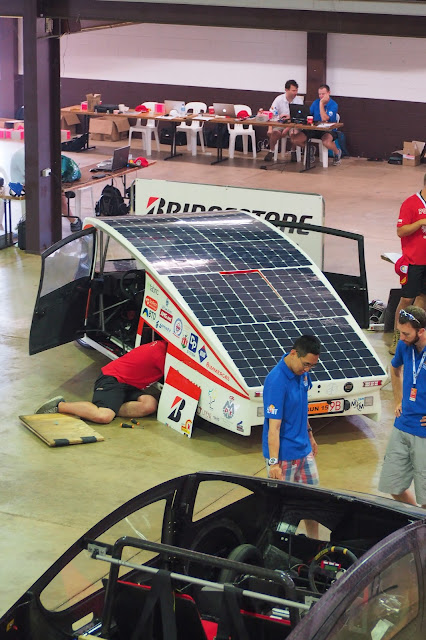 I missed getting a photo os SunSpec's array normalization, but the whole array panel is removable. It looked like the propped it up to point slightly sideways with a 2x4. 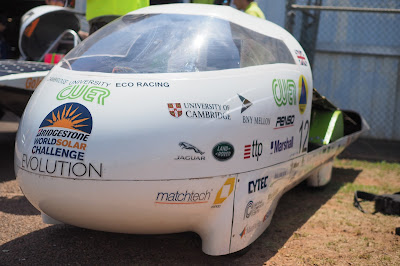 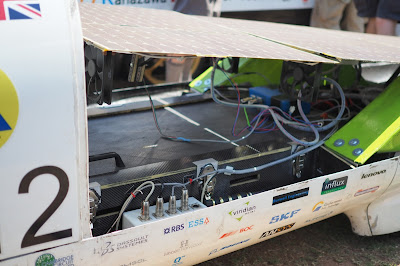 Evolution's array does not track the sun, unlike Resolution's array was going to in 2013. A team member told me that the team had to make a choice between not putting solar cells over the rear wheels to allow clearance for the panel to track the sun, or include more cells under the rear bubble but forgo tracking. The team did some calculations and determined extra cells with no solar tracking was the clear choice. It's also worth noting that these are not new cells - the array was salvaged from Resolution. 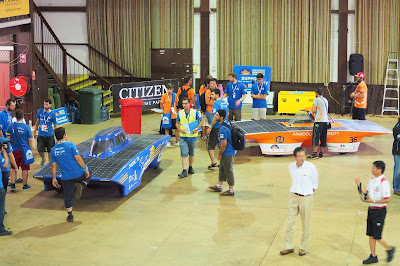 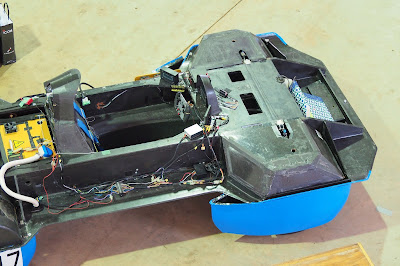 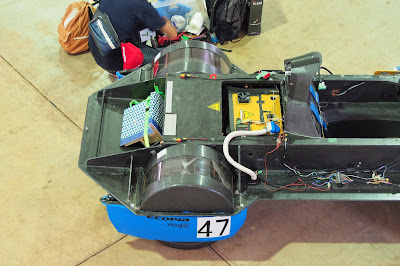 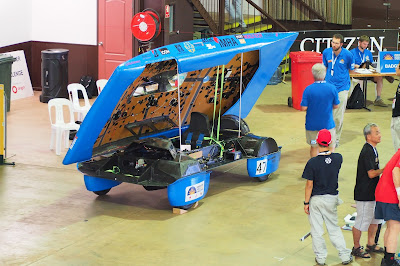 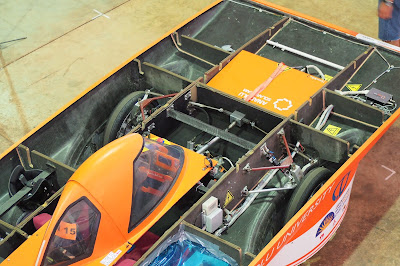 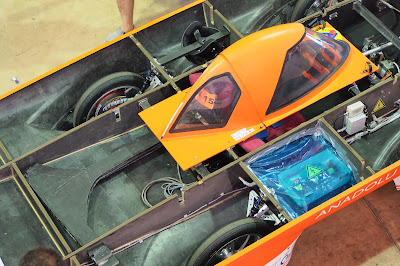 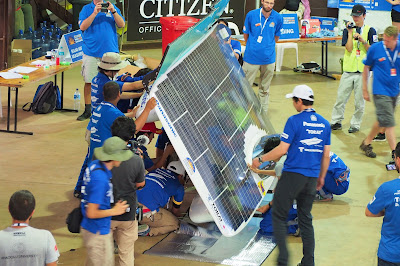 After seeing Tokai's array normalization, I took off for the track. RVCE showed up to register their team members right as I was leaving - although their car was still out in Hidden Valley when I got their. Members at the track said they expect their battery tomorrow. 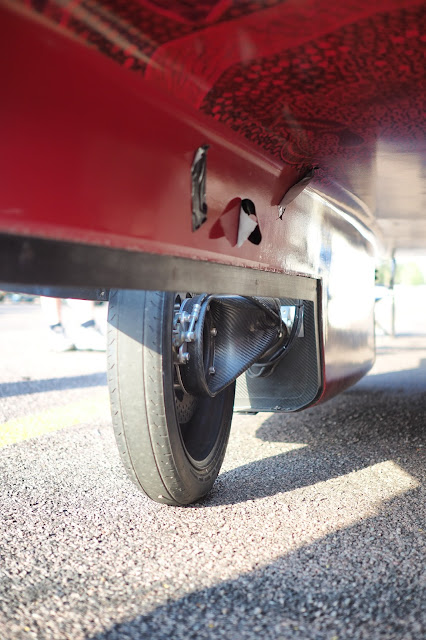 WSU assured me that the red duct tape on the front wheel covers is indeed from some last-minute aerodynamic re-contouring, and it'll finished up much prettier with matching vinyl by the start of the race.

I haven't seen too much of Arrow, due to them getting through inspection a day early - and I've missed them the few times I've been out to the track so far. Hopefully I'll see more of them and their car when I'm camped out at the track for the next two days. This is the same car that they raced to 7th place as a first-time team in 2013, and it held the lap record at Hidden Valley - just a few milliseconds over 2 minutes. They're looking to hold onto the top spot this year, and they have their work cut out for them - they tell me that they've clocked Michigan at 1:59 or so during practice. 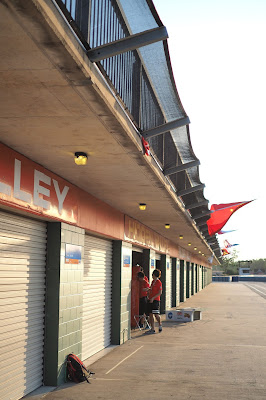 In the evening, there was an event barbecue hosted by Bridgestone. Great food, and I think the teams had a lot of fun! A lot of footballs and frisbees made an appearance. This is the last time they'll really get to unwind as a group until the finish line. 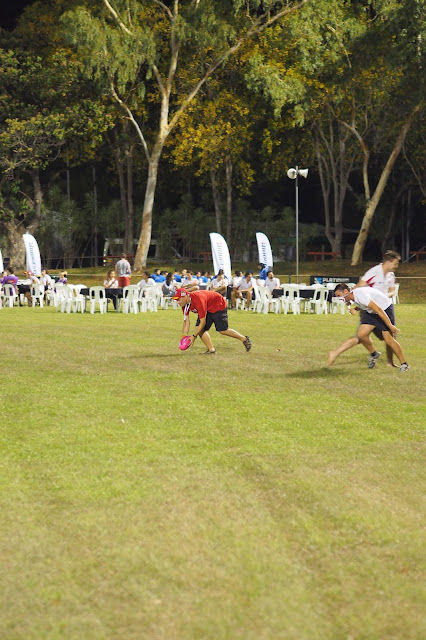 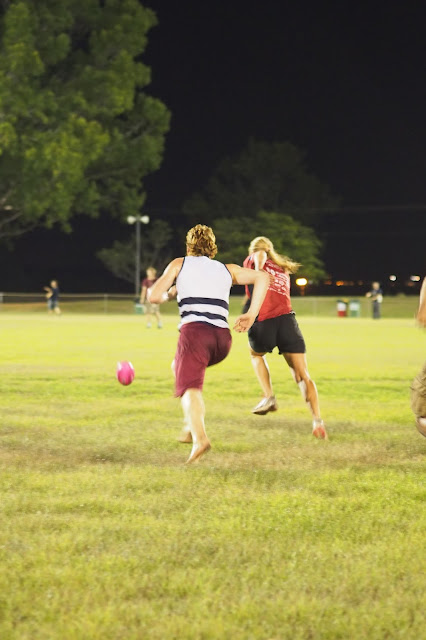 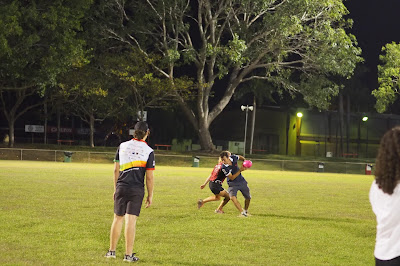 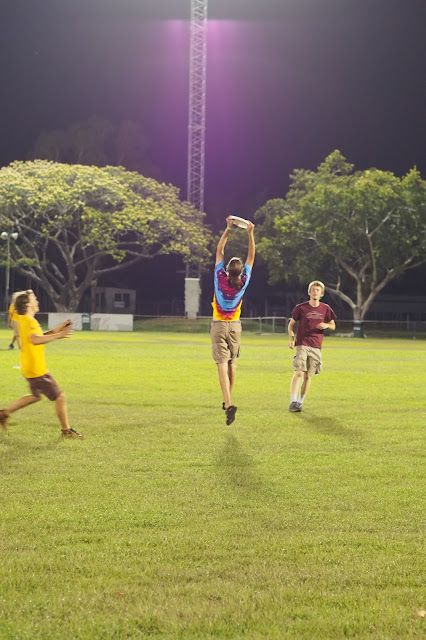 So now that inspection is (mostly) over and I've had a chance to really look over each of the cars, here are a few closing thoughts:

Challenger: I think it's going to be a tight field this year; Nuon may have some serious challengers for the title. They don't seem to have anything up their sleeves this year, just a refined version of last race's car - whereas their competition seem to be trying to push the boundaries. In particular, Twente is really chomping at the bit - you can see exactly how badly they want a win. Michigan also looks like they have a lot of fight in them. On the other hand, I'm not super impressed with Tokai's car - superficially, it looks flawless, but then I look at details like the blend at the trailing edge of the fairings and just laugh uproariously.

Stanford looks like they have solid car that has a good chance at a podium finish, although I'm not sure about the overall win.

Arrow, Toronto, Punch, and Principia all have cars that look well built and I'd expect to see them among the top 10 (I just realized I didn't post any photos of Principia from the first day of inspection - sorry about that!).

MegaLux and WSU are kind of wildcards. Their cars are manufactured extremely nicely, and although we haven't really seen what either team can do yet, WSU did very well for a rookie team in 2013 and MegaLux has been very successful in EcoMarathon.

All of the top teams have put a lot of effort into making sure they can normalize their array as far as possible within the new rules. The top teams are disproportionately represented among the teams that are tilting their whole cars (Stanford, Punch, WSU, Tokai, UKZN, and maybe Kogakuin).

Cruiser: I'm still convinced that Kogakuin is going run away with it, but honestly, I have no idea what to expect for 2nd place. Bochum, Minnesota, and Tehran are the only three teams that have anything even resembling an array normalization plan - UNSW, IVE, and Eindhoven all only pop the trunk panel up, while ITS, Lodz, and Kogakuin tilt the car backwards very slightly with stands of some sort. SunSpec tilts their array slightly (well under 45 degrees from horizontal).

I think the top four teams from last year (Eindhoven, Bochum, UNSW, and Minnesota) are the teams to watch for 2nd place. Tentatively, Minnesota and Eindhoven may have an edge over Bochum and UNSW - they have a LOT more array on their cars, and that's going to matter much more this year. But without knowing aero drag values for each car, I'm really just guessing.

The cars from Tehran, SunSpec, and particularly Lodz all have potential, but I'm not sure what to expect from the teams.

Whelp, that's all I've got tonight. See you tomorrow, folks! I'm going to be out at Hidden Valley all day trying to get some sweet action shots.
Posted at 8:09:00 AM